Calabria, Italy and its Genealogy, History, Culture and Language

An article featured in National Geographic magazine in 1923 showing the daily life in Calabria. 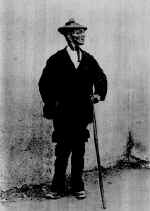 A Shepherd from the Toe of Italy's Boot

Though there are now few visitors to Calabria, this southernmost province [Reggio Calabria] of Italy proper has had many stirring events of history connected with it.  Scylla was a terror to Ulysses; it lay in the path of Garibaldi's triumphal march to Naples from Sicily; earthquakes often shatter the homes of its people, and archaeologists still find it a treasure-trove.
page 181

Such Types as an Artist Seeks

Many of the thriftiest citizens of Calabria have emigrated from its low, sandy plains and unhealthy marshes and have come to America. This region of Italy was once a notorious brigand retreat.
page 182

Many old customs, proverbs, and superstitions still survive in Calabria and all southern Italy.  When a girl child is born to a peasant he immediately plants a row of poplar trees, which will be large enough to cut down for her dowry when she is seventeen.
page 184 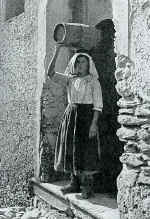 Her Cask is Filled with Calabrian Wine 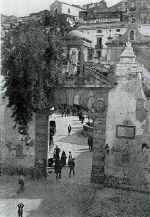 Just outside the city of Paola, the birthplace of the saint who founded the order of Mendicant Friars, there was an old monastery built in his honor around a fountain which he is said to have made gush out of the earth. To its waters are attributed many healing powers.
page 188 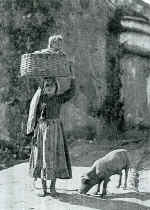 A Point of Vantage

These children and their pig live in Policastro, now a town of barely 500 inhabitants, but a city of power and affluence in the days of ancient Rome. It fell before the Saracens in 915 and was destroyed 140 years later by the Normans under their heroic leader, Robert Guiscard.
page 193 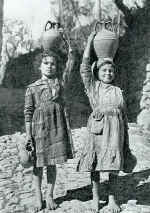 Paola is one of the most important towns in the neglected southwest coast of Italy. In the hills back of the city lived Re di Sila, or the King of the Mountains [sic], who during the 16th century was the terror of the Spanish viceroys and barons.
page 196

The following pages were not shown due to National Geographic Society's apparent ignorance of Italian geography--how ironic. The article was entitled "Daily Life in Calabria", but as you can see, they could not properly distinguish between the two distinct and geographically separated regions of Calabria and Campania. Any chance of a retrospective correction 100 years after the fact?